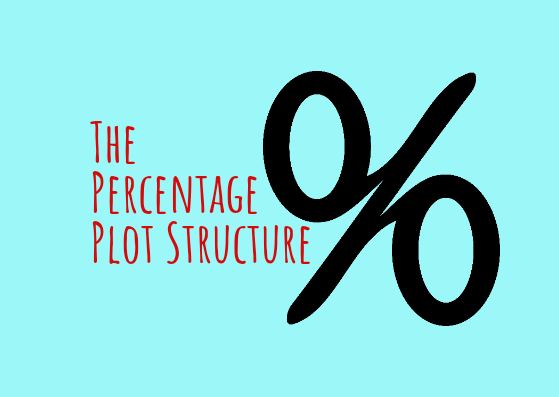 Hi all, I hope you’re well! Today I’m going to talk about the ‘Percentage Plot Structure’ also known as the ‘Movie Plot Structure’. It is a nice, easy way of outlining and structuring your plot in three acts, making sure all the important plot points are in the right places.

As I said above, this plot structure uses three acts. Each act takes up a percentage of your project with the first and third each taking up 25% and the second – the middle section – taking up 50%. This can give you a general idea of where all the different plot elements should fall, though it is only a guide – there are no hard and fast rules for creativity!

The Setup: Here is where you introduce your main character(s) and their status quo (how and where they live their normal day to day lives).

The Inciting Incident: Something happens early on which changes things for the character(s) and has a significant impact on them and how they see the world.

The First Turning Point: After the inciting incident, the character(s) will likely discuss what they should do with their nearest and dearest – often this is a character who has been a mentor to them and they may struggle over deciding what to do next.

Second act – Midsection – makes up 50% of the project
Rising Action: Here your character(s) will be attempting to achieve their goals but its always a good idea to have them thwarted at every turn. Making it difficult for them to succeed will create conflict and tension of which there can never be too much.

The First Pinch Point: Finally, things start to go well for your main character(s ) but the antagonistic force(s) will be closing in on them. Perhaps there is a battle or confrontation which increases the tension and ups the stakes.

The Crisis: Here, things begin to go wrong for the main character(s) as they make mistakes. They feel as though each decision they make is a bad one and they’ll feel as though nothing is going right. They may lose battles with the enemy or they might even lose loved ones here. Things just seem as bad as they could possibly be.

The Second Pinch Point: Your character(s) flaws pop up here and they start to get in their own way. For example, their overconfidence might alienate their friends from them.

Soon though, they begin to see ways in which those flaws can be overcome. The antagonistic force(s) also show up to intimidate the main character(s) and to show just how ruthless and bad they can be.

The Second Turning Point: Here your main character(s) begin to realise exactly what it is they’ll need to attain their goals. Someone has an epiphany and the beginnings of a plan begin to form for how they can defeat the antagonist(s) and get what they want.

The Climax: Here, the antagonistic forces are at their worst and though the main character(s) have a plan, they’re not sure if it will work.

The stakes are higher than ever – if the plan doesn’t work your character(s) will be defeated.

It is around this point that you should decide whether you will write a happy ending with your main character(s) achieving their goals or an unhappy ending where they will be defeated. You could even opt for a mixture of both, but this is where you will begin working towards the ending.

The Resolution: Your characters have either won the final battle or lost. Either way, they are different people from who they were at the start. They have gone through a character arc and have grown and evolved throughout the story due to everything they have been through. Their world is a very different one than when they started out.

Having defeated the antagonist(s) and won the day, or, conversely, – if you have decided on a not-so-happy ending – having had to make a retreat so that they might live to fight again, your character(s) must figure out how to live with the consequences of their actions.

Once you’ve outlined your story of course, then the harder work of actually writing it begins!

As always, thanks very much for reading my words, I really do appreciate it.