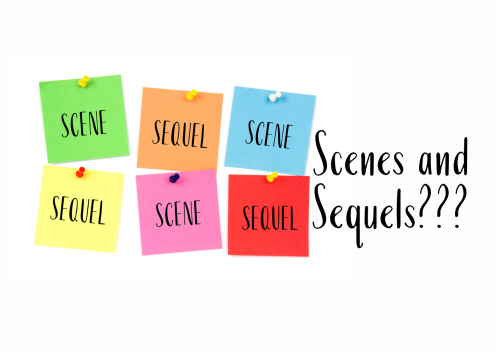 I had always thought that a scene was a scene; that you write what happens, who is involved and how they feel. Pretty standard stuff really. But then I read about sequels, and my mind went boom!

For years I had always been one of those people who just liked to write until they had finished, a pantser I suppose and I never really gave much thought to scenes. I just wrote the story.

But I decided that the quality of my writing could be improved upon and took a few courses and researched like a madman to learn everything I possibly could. I learned about structure, plotting and outlining and improved my grammar. I learned about scenes, and how something must happen in each scene that moves the story along. Great. I hadn’t been doing that before, and so I began to put that into practice.
Then I came upon Sequels, and I realised that writing a scene can be a lot more technical than I had ever realised.

You see, scenes involve goals, conflicts, and disasters. That probably doesn’t surprise you. However, I learned that sequels follow scenes and they are made up of reactions, dilemmas, and decisions. As I understand it, you write a scene and follow it up with a sequel. Then you write another scene and follow it with a sequel and so on until your story or book is finished.

It sounds very complicated, and it is (in my opinion), but it’s also very enlightening. I’ll outline the basics, but you’ll get a much greater understanding of what I’m talking about here – the place I first encountered this somewhat involved way of scene writing.

Goal:
The goal is what your POV character wants at the beginning of the scene, and it must be clear what the goal is. They have this goal so that they’re not just sitting around letting life happen. Something has to occur in the scene.

Conflict:
This is the thing or perhaps series of things that prevent the POV character from getting what they want (the goal). Without the conflict, the reader would become bored since there wouldn’t be a whole lot going on.

Disaster:
The disaster is the point when your character fails to reach their goal. This is what keeps the reader reading.

Decision:
Your POV Character must come up with some solutions to their problem and decide on a course of action. This allows them to become proactive again – taking action instead of waiting for things to happen.

There’s a little more to it than that, but this covers the gist of why Scenes and Sequels are necessary.

Thanks, as always for reading and you should definitely check out the link further up (Linked here too) because it gives a more in-depth look at the mechanics of scene construction.

Like Loading...
‹ 5 Ways to Reduce Your Distractions with Technology (2 min read)
10 Reasons that will Encourage you to Read (1 min read) ›